To the Sea of Japan (Day 5: Shibu to Naoetsu)

The last day, we rode from Shibu Onsen to Naoetsu.

August 8th, Typhon Shanshan(No.13) was approaching East Japan. We thought if it would blow hard, so we stoped riding. Fortunately, the weather forecast for Niigata Pref, our destination, was “cloudy with no high wind”, so we decided to keep riding. 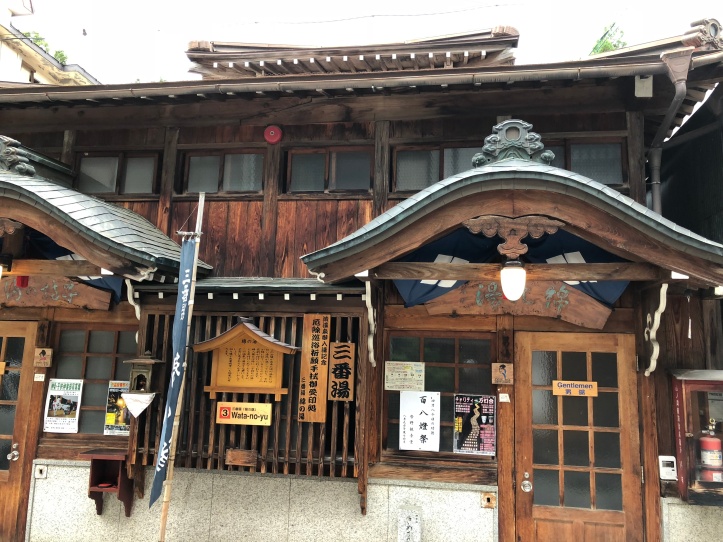 Wata-No-Yu, there were ingredients floating on the water like cotton(wata).

Before starting, my husband and I went to bathe in Wata-no-yu, the public bath in Shibu town. Many traditional Onsen towns have public baths, and locals have maintained them, and in general, the hot spring water is very very hot.
In Shibu town, there are nine public baths, and you can tour them, they have different resources and various health benefits.
The benefits of Wata-no-yu, the third bath, is that it is known to cure cuts, boils and to get pregnant.
The inn staff unlocked the doors of Onsen and we bathed separately.

To get to Naoetsu, we had to cross a mountain in Iiyama district, whichever route we choose. Three years ago, we had suffered steep hills from Nagano to Nojiriko lake.

There are some routes to cross the mountains, and before the tour, I researched them, looking for the route with the least car traffic and the more gentle hills. I chose Kendo(A prefecture road) No. 69 from the Michinoeki Toyoda, a roadside station.

We went down to Shinano river in a light rain. Then we crossed the bridge and started climbing a steep slope.

After we finished climbing the slope, we visited Michinoeki Furusato Toyoda to have a break.

We started riding Kendo No. 69. Indeed, there was light car traffic on the road, but the slope was steep.

We took some short breaks during the climb. My son started complaining of back pain.

My husband and I encouraged him several times. Finally, we saw a soba noodle restaurant on a hilltop and set it as our initial goal and kept climbing.

After we passed the nameless path, we went down the long slope with a spectacular view.

Soon after, we arrived at Nojiri-ko lake.

We rode along the lakeside and saw many western people enjoying their holidays.
We stopped at the Guest House LAMP, where we had stayed three years ago.

At a restaurant, we ordered different kinds of hamburgers.

Sekikawa, Sekiyama and Arai station, the memories of three years ago

From Nojiri-ko, we traced the route that we had ridden three years before.
We left LAMP and rode along R18 and stopped in front of the Hokkoku-Kaido History Museum.

Three years ago, we also visited the museum, so we didn’t enter it.
Yes, we also traced Hokkoku-Kaido roughly from Karuizawa Oiwake from the third day of this tour.

There was a barrier at Sekikawa in the Edo period, and the museum has some life-size models.

But this time, he arrived at the station with a full smile even though he rode a solo-seated bicycle. 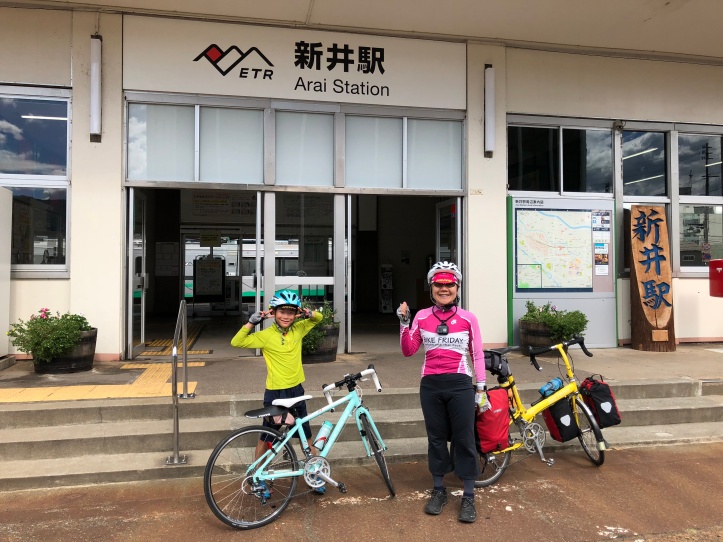 Three years ago, we managed to reach Arai station

Then we visited Arai station where we quitted the bike trip three years ago. It was only from 20km before Naoetsu station.

We went through Takada city. Takada is famous for “Gangi,” extended eaves of the store like arcades to shelter passengers from heavy snow.
My son learned about Gangi at a cram school, and he and I wanted to see “Gangi” which was built during the Edo Period.

We visited Takada castle. Most of all buildings were destroyed and reconstructed recently.

From Takada, we found a nice cycling path on the riverbank of Sekikawa river and rode on the road to the Sea of Japan.

Reached the Sea of Japan!!!

We arrived in Naoetsu city, our destination, the end of Hokkoku Kaido and the coast of the Sea of Japan.

We went to a sandy beach and touched the Sea of Japan.

Every year my son wrote his bike trip journal as his summer homework.
I’ll wrap up this post with his word in the journal. 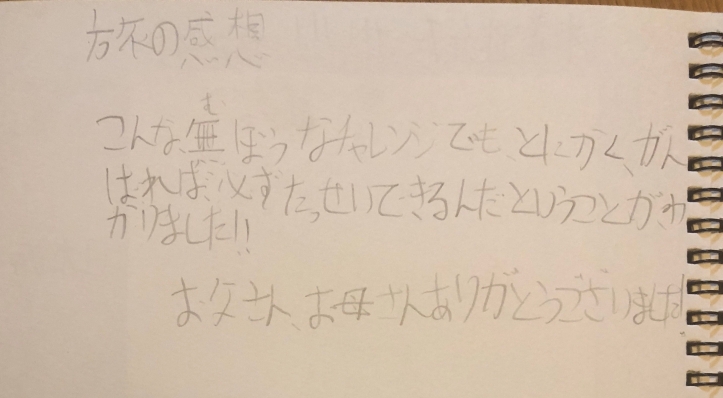 ” In this tour, I learned that if it seemed hard to reach, I strive for it and I can achieve my goal. Thank you, father and mother.”

Likewise, we were happy to ride with you. Thank you, my son.

This site uses Akismet to reduce spam. Learn how your comment data is processed.