My family went to ride bikes around Biwa lake (Biwako) with my friends from May 3rd to 7th.
Before the Biwako Bike tour, we visited Mt. Hiei, Omi Jingu Shrine, and Mii-dera temple.

Mt. Hiei is a mountain between Kyoto and Shiga prefecture.
I’ve wanted to go to Mt. Hiei for a long time because the Enryaku-Ji temple is on top of Mt. Hiei.
Enryaku-Ji was established by Saicho, one of the greatest Buddhist priests in 788.
Saicho was sent to Tang Dynasty China by the Emperor to master the latest Buddhism because at that time Buddhism was corrupt and some of the priests interfered with the politics.
After studying abroad, he mastered esoteric Buddhism and established the Tendai sect and founded Enryakuji-Temple as the place of Buddhism training.
A lot of founders of the great sects of Japanese Buddhism studied at the temple.
The temple was attacked by Oda Nobunaga in 1571 and burned down because monks did not obey him, but it was rebuilt by Toyotomi Hideyoshi and Tokugawa Ieyasu after Nobunaga died.
On that day, we did not go there by bike because there is only a Hieizan Driveway for the exclusive use of cars to the Enryaku-Ji. 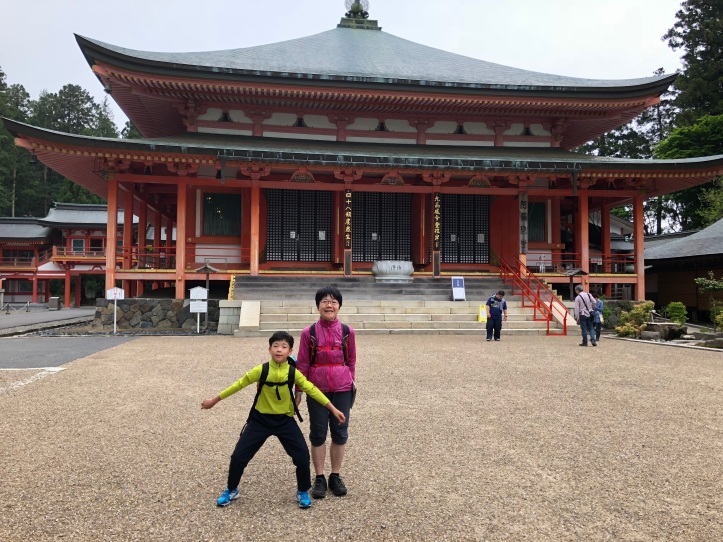 9:30 am, we arrived Enryaku-Ji and visited To-do(East tower) area, the central stupa area. ( There are three areas in Enryakuji-temple)
We first visited Kokuho-den, national treasure storage building and appreciated the collection of numerous statues of Buddha made from the 9th century. My son mastered from the statues some different styles of interlacing his fingers.
Konpon Chudo, the main hall of Enryaku-Ji was first constructed in 788, however, it was demolished sometimes, and the existing building was re-constructed in 1642 by Tokugawa Iemitsu, the 3rd shogun of Tokugawa government.
There are the hanging lanterns in front of the box of the main statue, which is the eternal light has shone continuously from 1,200 years, from the time of Saisho.

There is a “Shoto”(bell tower) and visitors can ring the bell by 50 yen. My husband and my son rang the bell but the gong was very heavy so my son struggled to ring it.

11:30 am, we ate Shojin Ryori(Buddhist Cuisine) at a restaurant in Enryaku-Ji Kaikan. Shojin Ryori is vegetarian monk food. it is not only vegetarian food but also some ingredients sophisticatedly mimicked fish and meat.
There are only two menus at the restaurant. Japanese and Chinese style.
We had two Japanese style kaiseki and a Chinese kaiseki.

The temple precinct is very huge, and there are buses go around the three main area; To-do, Sai-to, and Yokawa.
After lunch, we visited Saito( West tower) area. 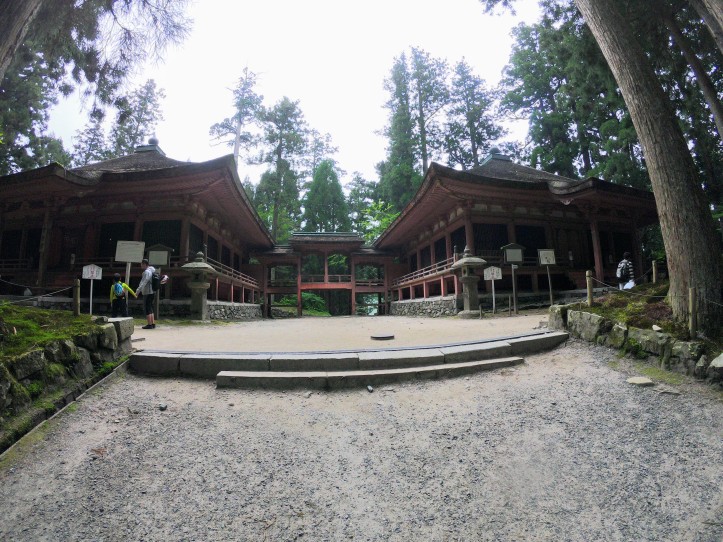 Ninai-Do is two same designed halls connected with a corridor. The hall name came from the legend of Benkei; a warrior-monk who had extraordinary power and served the famous Minamoto no Yoshitsune in the late 12th century. It is said that Benkei lifted this two buildings like a barbell.
The temple gives some practices for visitors; meditation, Sutra copying. I loved to practice meditation there, but my husband and my son prefered not to.

We got on Keihan line to [Omi Jingu].
Omi Jingu was constructed in 1940 and dedicated to Emperor Tenji (626-672, the 38th emperor of Japan). He moved Japan’s capital here from Asuka, Nara in A. D. 667, but five years later, after he passed away, the capital returned to Asuka.
The shrine does not have a long history, but it has a calm and quiet atmosphere and buildings are simple but beautiful.
This shrine is now famous for competitive Karuta (Japanese card game). All through the year, lots of competitions are held here, it is also the location of a film, “Chihaya-Furu”, a film version of a manga about competitive Karuta.
That is because the waka (Japanese traditional short, 31-letters poem) of Emperor Tenji was selected as the first in Hyakunin-Isshu.

Mii-dera(Onjo-Ji) is a temple complex and has over thousand year’s history.
“Mii” literally means a sacred spring water for Emperors. It is said that the water of the well in the temple was used for the baby’s first bath for three generations emperors; Tenji, Tenmu, and Jito in the 7th century.

The temple was worshipped by imperial families, aristocrats, and samurai families.
However, the temple sometimes battled with the Enryaku-Ji temple was set on fire and finally, Hideyoshi confiscated all of the precincts of the temple.
The temple was revived many times that is “The Phoenix temple”.

Kondo, the main hall was designated as a Japan national treasure.
When we visited Kondo, a special viewing was held and the monk recommended us to see it because some precious statues were on display for the first time.
Then we pay the additional fee and entered the Naijin, the inner area that is usually closed behind walls.

Before viewing the statues, we were purified by a monk. He put powder of incense on our palm and sang sutras, and enjoyed old, precious and beautiful statues of gods.
The temple has also a temple bell which visitors can ring, but the price was more expensive than Enryaku-Ji; 300yen ($3)

We had tea and sweets at a café in the temple because we had walked a lot and my son told us he was tired. Actually, we walked 15.5 km at that day. It was a little bit tough day for a ten years old boy.

Then we walked to the inns we stayed that day.
After a break, we went to a supermarket along the shopping street in the main area of Otsu city.
While walking the street, we happened to see the life-scale model of the floats of Otsu Festival.

The float is over six meters high and has a mechanical doll. Usually, the real floats are disassembled and housed in each town’s garages.
Otsu Festival has a history of about 400 hundred years and the floats are also very old. The festival is held in every October. I’d like to see it sometime.

Otsu is only 10 minutes from Kyoto by train and there are lots of interesting historical shrines and temples, but we saw much fewer visitors than Kyoto.
If you love to see temples and shrines in a serene atmosphere, I recommend visiting Otsu city.

This site uses Akismet to reduce spam. Learn how your comment data is processed.